Asbury Park resident Howard Schoor lives by one edict – it is what it is.

An engineer turned entrepreneur, inventor, home builder, and bank owner, Schoor went on to become one of the 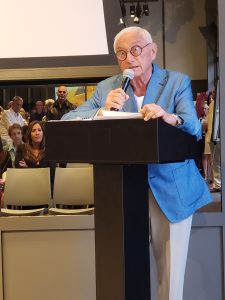 And so it came as no surprise to those who know him well that the soon to be octogenarian has embarked on a new vocation; that of visual artist.

“This began long before retirement,” he said. “But no one knew. So, this all seems very sudden.”

Schoor, an avid art collector who bent toward the likes of Piet Mondrian, Jasper Johns and Andy Warhol, created his own expressionism – he is a self described trianglist, born from the tool he most used during the five decades spent as an engineer.

“It was my tool and a constant companion,” he said. “For years I’d been painting these triangles. It took me years to realize that this geometric shape was bubbling up from deep within my own subconscious.”

On Saturday, Schoor begins a residency [the first of its kind] at Parlor Gallery, located at 717 Cookman Avenue. Running through Sept. 1, an opening reception will be held from 6 to 9 p.m. Aug. 4 and an artist talk is slated for 11 a.m. to 1 p.m. Aug 12.

Many may recognize Schoor from his many notable ventures, which began with the 1968 creation of Schoor Depalma, a firm that left its mark throughout New Jersey, Pennsylvania, New York, Florida, and Arizona. After 25 years, he turned his attention to home construction and land development by way of SGS Communities, HMS Consulting, and Woodstone Companies before trying a hand in the world of finance through the creation of Community Bank of New Jersey – serving as the director of Midlantic/Merchants National Bank and New Era Bank, and on the Board of First Pioneer Farm Credit Association Customer Service Council and of YHD and Foxtons North America. There was an uncharted plunge into horseracing by way of Showplace Farms, and an invention through Seat Strap, all the while establishing himself as a philanthropist and humanitarian via the Schoor Family Foundation.

Today, in the ilk of the trailblazing spirit that made him a successful businessman and entrepreneur, Schoor coined the new term for his artwork. As Picasso is known for cubism, and Warhol for his pop art, Schoor will be known for his trianglism.

“I was a collector long before I began to paint,” he said. “I figured out that the business of art is akin to a dead language. Sure, people bandy about its popular words and phrases but very few understand it and even fewer are fluent.”

The North Beach resident, who paints for a minimum of 6 hours a day at his Mattison Avenue 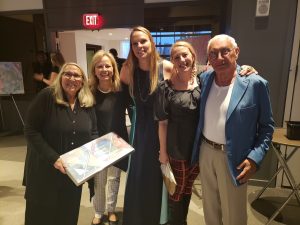 studio, has taken a no nonsense approach to the business behind his art. The artist meets businessman in him led to the hiring of branding firm and the launching of Howard Schoor Art. Schoor says don’t look for a deep meaning in his artform, instead just enjoy their clean, bold, and crisp purist nature.

The team behind the man and his new brand includes Ruby Edelman, Barbara Noviello, Greg Dubose, Melanie Knobel and Sue Dalrymple. And over the past year, he has held a series of private showings and public pop up art exhibits, including at the Design Center inside The Lofts at Pier Village Design Center and at The Asbury, located on Fifth Avenue.

“There’s a lot more to my story,” he said. “There’s the art itself, of course, and my expectation to sell individual pieces of my work for $50,000 each in a relatively short period of time. But, I also hope my story motivates others of a similar age and situation.

May 2020 Art Donations went to the Tigger Foundation, the Calhoun School, and the Gaynor School

For behind the canvas access and all the news that is Howard Schoor and Trianglism, join our community.